Toast it up a notch 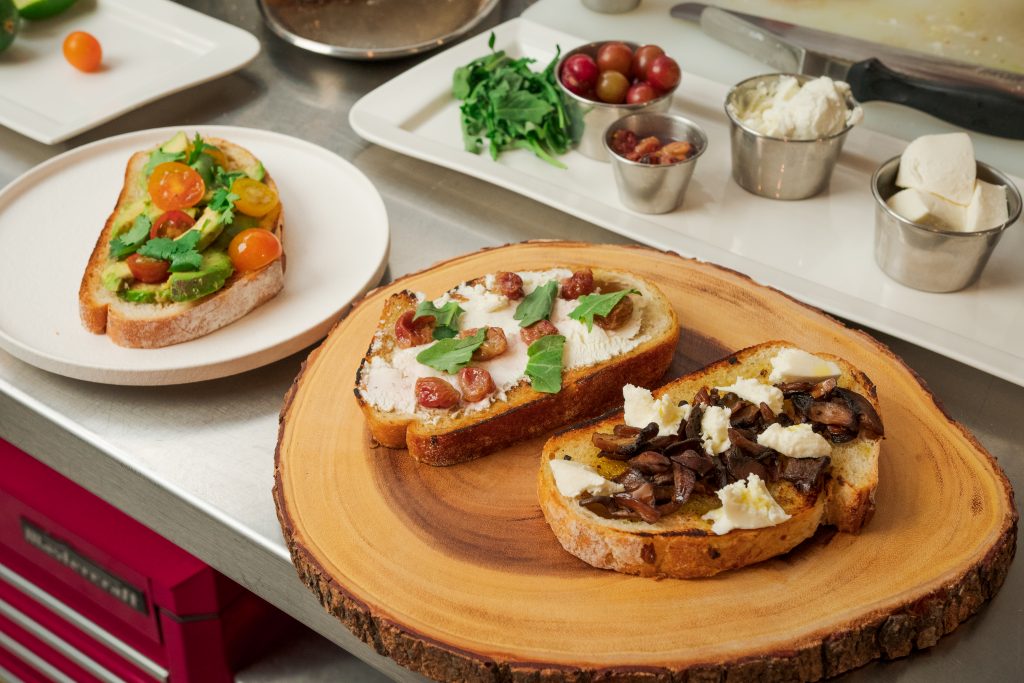 At Covenant House, we encourage youth to create a customized plan of action with education, life skills and employment training. One of the ways we do this is through our culinary arts training program, Cooking for Life. Led by chef instructor, Danny Moon, this program gives youth hands-on learning opportunities they can use to seek employment within the hospitality industry and beyond.

Are you looking to build on your cooking skills? Danny Moon is sharing three different ways you can turn a piece of toast into a delicious treat. Whether it is for breakfast or a quick snack, all you will need is a few simple ingredients. Learn more by watching the video below. Bon appétit!

Danny: Hi, everyone. My name is Danny Moon. I’m the Chef Instructor here for the Cooking for Life program at Covenant House Toronto. We run a program where we’re trying to equip different youth with a lot of different skills to get them equipped and ready for the hospitality industry.

Today, we want to do something that’s a little bit on the simpler end that you might want to eat for breakfast. But honestly, you can probably eat any time on the day, really simple. We’re gonna make some avocado toast. And then after we do that, I’m gonna show you maybe a couple of different variations that you can do that I think are really yummy, and just really simple to put together.

So first, you wanna grab some bread. Honestly, you can probably use anything you want, but because you’re gonna be heating it up and making some toast, I really like to just use old bread. No sense in using fresh bread that you just bought. So anything you have laying around really is good. I really like crusty bread, personally. I really like my toast to be relatively thick, so I’m gonna do that right now. Cut off a thick slice, okay. Get my heat going.

And with your toast, you know, depending on what kind of bread you’re using, you can easily just use a, you know, simple conventional toaster. You could throw it on the grill, you could, you know, but it under a boiler, a lot of different things. It really doesn’t matter. The recipe that I’m doing today, there’s so many different things that you can interchange, all up to what your preferences are, especially like what’s available in your kitchen.

So I’m gonna let that heat up a little bit. While I’m doing that, I’m just gonna – just drizzle a little bit of olive oil on each side of the bread, just to give it a little bit of fat. Moisten it up a bit, before it hits my pan, or whatever your heat source is. And while I’m waiting for that to get hot, let’s go work on our avocado.

So avocado is relatively simple. All you wanna do is kind of make a slice at the top and just kind of like follow it around in a circle, all around to the other end of the avocado so that you can kind of twist off each half. And once you see the seed, just wanna do a little knock into the seed; give a little twist, and then your seed pops out.

If you’re worried about kind of being close to the blade, a really safe way to do this is just grab a hand towel, and just pop it off like that. Once you got your avocado out, there’s a lot of different ways people do this. Me personally, I just like putting the spoon in under it, in between the flesh and the skin. And just kind of going all the way around and scooping it out. Pretty easy. If your avocado is ripe, it should flick out pretty easily.

Once you got that, now even this, up to you, you could slice it up and just lay it out like that. You can mush it up in a bowl and season it that way. But I’m just trying to do it as simple as possible. The less steps, the better I think for everybody.

So I’m just gonna slice it up, pretty thin.

And then once you got it all out, you don’t want it to turn colour too much because it’s being exposed in the air. All that oxidization is going to turn it really dark. So, I want to – looks like my pan is pretty hot, so I’m gonna put my toast down there. And let it go.

So like I was saying, you don’t want to turn your avocado too dark, so I’m just gonna sprinkle a little lime juice. Now a lot of people like to use lemon juice and that definitely does that job because the acidity is basically the biggest thing that matters. But for me, I personally like the lime juice a lot better in terms of flavour, so that’s why I’m choosing lime right here.

Now while I’m waiting for my toast to kind of brown up. Another thing I’m going to do, just to amp it up a little bit more. I’m gonna cut some grape or cherry tomatoes, whatever you have lying around. Maybe just half them. And what I’m gonna do is just use these for garnish. I’m just gonna throw them into a little container here. Put a little bit of olive oil. A little bit of salt. A little bit of pepper, just to season it up a bit.

And then, just mix it up. Just make sure everything, kind of touching all that seasoning. Everything is getting seasoned equally, okay. And just set it aside. That’s going to be our garnish, with a little bit of cilantro leaves.

So once your toast is done. And it’s pretty much there, right? I’m gonna line up my avocado slices. Okay.

You might need a little bit more, a little bit less, you know, depending on the size of your bread or your slice of toast and whatnot. I’m gonna give one little extra little squeeze of lime juice there, right?

And you can definitely easily stop there if that’s all you have in your kitchen. No problem with that and it’ll still taste good. Like I said, I just want to amp it up a little bit more, so I’m gonna put these half tomatoes down here, just to garnish.

And then like I was saying, just to finish off, pick a few cilantro leaves. And just rip them up. You don’t need to like, you know, take the time to slice them up or anything. I really like having these chunks of leaves scattered around the top for garnish cause then you can really taste the leaves a lot more. It does become a little bit kind of like a Mexican-flavoured avocado toast. Me personally, I really like the way that tastes.

So there’s your simple avocado toast right here. And then I was talking about some variations. Honestly, whatever you have lying around, I’m sure you can find some combination that will work for you.

But I want to show you a couple that I had. The other day, I roasted some mushrooms as a garnish for something else. So I had some leftover. So what do I wanna do? I made my toast again and then I’m just going to sprinkle some of this on top of my toast, my roasted mushroom.

So you get some mushrooms scattered around the whole piece of toast. And because it’s such a savoury, rich flavour, I thought – or the youth thought – putting some fresh mozzarella. Just rip it up, don’t worry about like cutting uniform slices or whatnot.

But yeah, pairing the roasted mushrooms with some of this fresh mozzarella, that kind of creamy more neutral flavour, we thought blended really well as a flavour pairing.

There’s one right there. So all you gotta do. If you want, you can even just do a little bit of olive oil. Just right on top of where that mozzarella sits adds a little bit of richness to it. But still mellow.

So the last combination I want to show you, you get your toast. If you happen to have some goat cheese laying around, just grab some of that. And just use it as a spread.

I would say, let your toast cool down a little bit before you go ahead and do this or else your goat cheese might turn a little bit too runny, right. And goat cheese tends to be a pretty strong, tart flavour so I wouldn’t go too overboard with it. But you wanna spread that on your toast like that.

And then, if you happen to have some grapes lying around, I would throw those on.

Now I actually happen to have some grapes that I roasted the other day for a garnish for a salad. And so I’m gonna throw those on. Some roasted grapes. And if you’re wondering, “How the heck do you roast grapes?” It’s literally just putting it on a sheet pan, maybe throwing some olive oil on it, with some salt. A little bit of salt. And then just throwing it into the oven for a little bit until it wrinkles up. And then you’ll see some natural juices that kind of run off from the grape. And you can add that as well.

And because you have so much tart and sweet flavours there, I thought it might be good to just rip up some arugula. Just to get a little bit of bite to balance out those flavours and accompany those ingredients that are already on there.

So, there are your two variations of toast in the morning. Hope you enjoy.