Remembering Ray: donor from day one 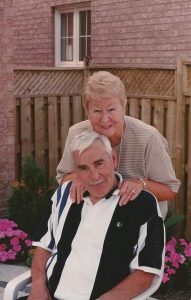 Since Covenant House’s early days in the 1980s, Raymond and Betty Morris made a monthly gift of $30 without fail. No matter the ups and downs of life, jobs, the economy, the Morrises dutifully contributed. They never spoke of it, they just did it because they believed in the organization and the important work of Covenant House.

These monthly donations only came to light in recent years when, a decade after Betty had passed away, Ray was reviewing his budget with his daughter, Kathy. On a fixed pensioner income, Kathy suggested her dad cut out extras, like donations. Ray refused.

“He was adamant he would continue donating to the organization,” Kathy reflects. “He and my mom felt strongly about Covenant House. They had a passion about youth on the street and getting them help.” She adds, “I think it speaks volumes to the wonderful parents my brothers and I had.”

Ray was a dedicated family man who wanted to do everything he could not only for his own children, but for children he didn’t even know. Although he gave quietly for the last 40 years, the effects of his regular contributions will echo long after he is gone.